The Passion of Latin Lovers
When Virginia's all-star team of young scholars competes in a national quiz bowl, a dead language is very much alive 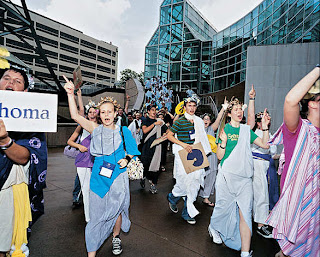 High school participants march in a parade at last summer's National Junior Classical League convention in Knoxville, Tenn. The convention draws more than 1,500 students, teachers and chaperones for a week full of Greek- and Roman-themed activities and contests. 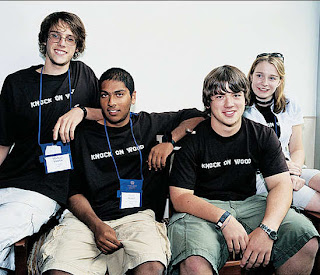 Members of the upper-level Virginia state certamen team, from left: Michael Velchik, Imran Husain, Erik Fredericksen and Emma Leahy. "Certamen" refers to a quiz-bowl-style contest, based on Roman literature, mythology, history and grammar, and requires speed, countless hours of preparation, and knowledge of grammatical intricacies and mythological details that most people have never heard of. 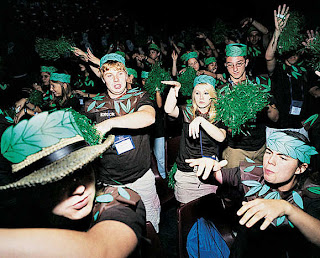 The certamen is the central event, but it's far from the only thing going on at the convention, which also includes Olympika games and academic competitions; there are "Virgilicious" T-shirts and "What would Julius Caesar do?" buttons. There are state cheers in Latin, a Rent-a-Roman fundraising auction and a final procession and banquet for which each student has packed a toga. 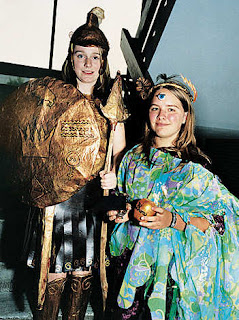 Emma Leahy, left, and Ingrid Heidelberger dressed as Peleus and Thetis, the father and mother of Achilles, for a costume contest. They took first place. 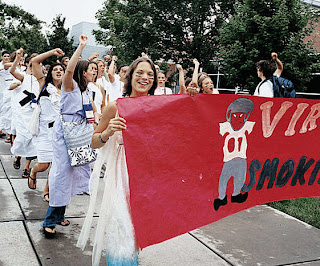 The convention ends with a parade of togas and Latin chants. "I think it's extremely arrogant to say that we don't have to study this dead language because our culture is what's going on right now," says Erik Fredericksen, grammarian and captain of Virginia's upper-level certamen team. "Their culture lasted much longer than ours has, so there's got be something in it worth studying."
Συνέγραψεν Φειδίας ἡμέρα Κυριακή, Δεκεμβρίου 23, 2007