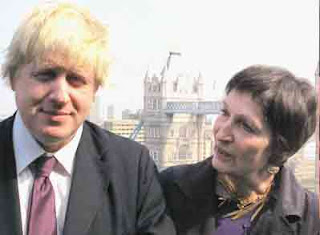 This interview was done in April 2009, for our "Job's Corner" by Olivier Coen (Anarès) and Elizabeth Antébi, writer, historian et creator of the Festival.

- It's almost the First Anniversary of your election as Mayor of London. At that time, do you remember what your father said, that he who can master Demosthenes and knows Pericles can master a city like London? What would you say, one year after, about that?

- I have no reason to depart from that opinion, it's absolutely true ! I spent myself almost twenty years, well, I cannot remember exactly how much, anyway Latin and Greek was the bedrock of my own education. I think, it's invaluable. It teaches you about Civilisation, about Politics, about Democratic participation and all sorts of difficulties that leaders encounter.

- We try to convince parents and children that Latin and Greek can really help you to be able to work better, to find a job and construct a career. What would you think of it ?

- I think it's a fantastic mental training, because to do Latin and Greek properly requires a great deal of intellectual discipline - you have to understand the grammar and you have got to fit all together, and it teaches you obviously how to think, how to think straight. If you do the philosophy as well, it gives you a huge understanding of the origins of European civilization. So I thoroughly encourage everybody to do it, but don't bubble ... don't think you can just do it without learning Latin and Greek, you must learn the languages.

- Some parents think that it is more useful to speak Chinese ?

- Absolute nonsense ! And there is an increasing school of Chinese studies of Latin and Greek and quite right too. Because Latin and Greek, Latin in particular of course, is the origin of so many other Romance languages around the world. If you read Latin you can pick up a newspaper across Latin America, across much of Europe, and you can more or less understand what is being written and it is invaluable too. Of course, it's true that Chinese is an important language to learn. But English is the language of global capitalism and I would thoroughly recommend that people study Latin and Greek and English.

- In the East, there are many Web sites speaking Latin for the news in particular, in Finland, in Germany ...

- Let me make a point to you. We have a huge issue in Europe today. And it's a great feeling that this continent, this city was founded by the Romans. And nobody feels the sense of European unity, that they used to under the Roman Empire, do they ? And it seems to be that one way we can inspire that again, will be to encourage every people in Europe to learn Latin. Because when the Roman Empire existed and when Europe was genuinely united, everybody studied the same texts. And every child could read the story of Dido and Aeneas and could recite it, but it's no longer true. But if they read it again and if only it was common curriculum of every European country, then once again you would have a sense of collective cultural heritage.

- Yes, you spotted that one.

- ... yes, absolutely. They were cancelled by Emperor Theodosius II or I in his 383 edict ... I don't remember exactly ... because they were thought to be ... they were pagan, it was too much nudity involved.

- That's a cross-heritage, because you were in Beijing and now, back to London, you'll receive the Olympic Games soon. And you said that you will restore the Milo of Croton ...

- Oh yes, I remember that. Well, I think it's a shame that we have lost some of the great ancient disciplines. And there was the famous Pankration, it was only in boxing and wrestling. It was such an event ! There, you had to carry an ox on your shoulders, the length of the stadium, then kill it with your bare hands, then eat it - all in the same day ; and I have the feeling that it was Milo of Croton ... maybe I'm wrong; but my memory tells me that it was Milo of Croton who excelled in this sport. And it seems to me that it would be a very good thing to be back to and also would help us ...to overcome the French phobia of British beef !!.We can compel the French participants at eat a British cow !!! So they'll finally lift their unjust blockade !

- Well, as a political man, when you are looking at Iran, do you think of Xenophon ? When looking at Egypt of Herodotus ? When you see peace in Europe of Aristophanes?

- I do, of course I do ! And I see the huge continuity between the Ancient world and the Modern world. And if you go to Athens, what's so astonishing is the linguistic continuity : you can pick up "Tachidromos" or any newspaper, and you can read it! It's the language of Pericles ! It is the same script, the words are the same. And if you go to Egypt, it's absolutely true, you can see the same Pyramids that Herodotus saw, you can see the same Sphynx that Herodotus saw, you can buy the same souvenirs, and you can be ripped off exactly the same way by the same guides.

- For the children, could it be a key to the world ? You said once that against the "culture" (if it is a culture) of knives, the best thing would be to teach Latin and Greek in all the schools ?

- I never said that: journalists make things up. But, it's true ! I mean it's certainly true that one of the things you can do is to give better education; one of the things that I find sad about education in Britain is that we have such a restricted number of schools that actually offer Latin and Greek. I'd like to expand it, that's one of the reasons we are having seminars here, in City Hall, to encourage it.

- People uses to say that it's reserved for the upper class.

- That's why we do that. Too few kids from the schools of London have the opportunity to learn Latin and Greek ,and too few people of mature age - I myself would like to ... I don't read enough, I read Homer, I have a wonderful book of Lyric Poets, but ...

- My message to everybody who remembers any of their Latin and Greek is the great words of the poet Solon, who was Archon ... the leader of Athens, and he said : ΓΗΡΑΣΚΩ Δ' ΑΕΙ ΠΟΛΛA ΔΙΔΑΣΚΟΜΕΝΟΣ (Gèraskô d' aei polla didaskomenos"): "I grow old, always learning a lot", so "I keep learning as I grow older". That's what we should do - with Latin and Greek.
That's my message to everybody !
GERASKETE D' AEI POLLA DIDASKOMENOI "Apprenez chaque jour quelque chose de nouveau !" 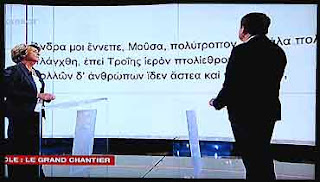